Travel Delayed as Flights Grounded Due to Technical Problems 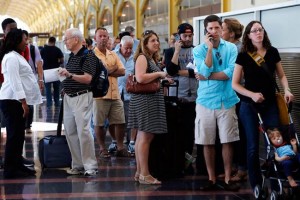 Technical problems at a Virginia air traffic control center left many passengers stranded due to hundreds of flights to and from different airports across a large around of the northeast were canceled or delayed on Saturday.

The Federal Aviation Administration put the blame for the problem on technical issues at a Leesburg, Virginia air traffic control center. The federal agency said that the problem was resolved and officials were working on lifting any of the remaining orders of holding planes from taking off.

Delays started to build on Saturday morning just before 10:00 am according to an online site dedicated to flight monitoring. Flights headed to Washington area airports were the most affected, including Dulles International and Reagan National Airport amongst others.

By middle of the afternoon on Saturday, 50% of the inbound flights and over 42% of the outbound ones were cancelled at Washington’s Reagan National and the delays there were averaging close to three hours, according to the online monitoring site FlightRadar24.

Baltimore airports had 58% of their inbound and 36% of their outbound flights cancelled. Delays there exceeded one hour.

The FAA said that many other flights had been affected since they fly over the Washington area. The federal agency said it was trying to re-route many flights to keep them from flying over the affected area.

Officials in the FAA said the problem was due to an automation snafu at its center in Leesburg. That center handles the air traffic that is high-altitude for the region that was affected. The problem was not thought to be caused by any hacking or accident.

Information the FAA posted online indicated there had been a problem with a computer system known as ERAM or En Route Automation Modernization at the center in Leesburg.

The FAA completed installing the affected computer system in the last of the 20 air traffic control center for high-altitude earlier in the year. The completion of all installation of the systems was many years behind schedule.

Reviewing Excel and Its Competitors