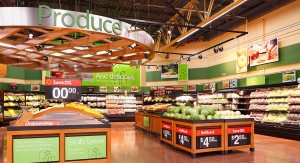 Walmart the world’s largest retailer cuts its forecast for annual profit as it was hurt from a strong U.S. dollar as well as lower margins across the U.S. The company also was hit on more spending for e-commerce and on wages.

The Arkansas based retailer reported that earnings for its second quarter were $1.08 per share, which was below the $1.12 per share Wall Street expectations. It announced that rates of currency exchange had been responsible for cutting its per share earnings by 4 cents. The stock at Walmart was lower by 2% in early trading on Tuesday.

The lackluster outlook and earnings at Walmart came despite its revenue increasing to just over $120.2 billion, which came in at $500 million higher than was forecasted.

The discount retailer announced that its comparable sales for U.S. based stores or sales from stores open 13 months or more were up 1.5%, which was a healthy increase. Sales of same stores increases were an improvement of 1% from last quarter.

Profits are predicted to be weaker than had been expected moving forward. The retail behemoth, which is based in Arkansas, pared its guidance for the full year to between $4.40 and $4.70 from its previous estimate of between $4.70 and $5.05.

Walmart has made large investments in stores and in its e-commerce business, as well as paying higher wages for its employees, as part of its effort to overcome a decline in sales as well as market share.

A portion of the investment appears as though it is paying off. The giant retailer said global sales in its e-commerce sector were up 16% when eliminating fluctuations in currency.

The company, which is known for its huge supercenters, is opening many new locations that are smaller format and called Neighborhood Markets that cater to consumers who increasingly prefer to shop at more convenient, central locations.

Walmart announced that its comparable sales in its Neighborhood Markets were up 7.3% with solid sales growth from its new stores.

Nevertheless, low margins in the supercenters are weighting on the overall performance.

Share Repurchase Plan Approved by Skyworks Solutions Board of Directors