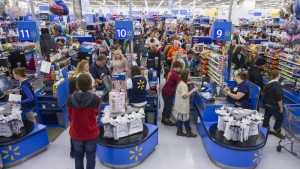 Target and Walmart, two of the largest retailers in the U.S. rolled out on Thursday their plans to lure in shoppers to their stores during the upcoming holiday shopping season, which includes increased marketing, better looking stores and discounts.

The moves by the two retailers illustrate just how important the shopping season during the holidays really is to retailers. It is close to a two-month period that accounts for about 20% of the annual sales in the retail industry.

Target and Walmart, in particular, must prove a great deal during the upcoming holiday shopping season. Both retailers head into the high season with turnaround plans having been launched following a battery taken by the economy as well as some of their own miscues.

The turnaround for Target has gained traction above that of Walmart’s. This past August, Target increased its profit projection for the year and reported a fourth consecutive gain in revenue for its stores opened 13 months or more, a key figure for the industry.

The results are supporting evidence that the efforts by Brian Cornell, the CEO are paying off.

At the same time, Walmart announced in the beginning of October that its revenue for its current fiscal year was going to be flat, down for the forecast the company released earlier of up to 2% sales growth.

Now it is expecting profit to drop by up to 12% for the upcoming fiscal year as the spending on higher wages and e-commerce has squeezed the bottom line.

This comes at a time that Greg Foran the CEO at Walmart U.S. is leading a major overhaul of its stores that includes the basics such as making sure the stores are well stocked and cleaner.

The stores will both be offering huge discounts with a rollback of prices beginning for both on November 1 and will last for 90 days.

Walmart is offering free shipping with a minimum of $50, which is the same as last year. Target will return its free shipping for the holidays with no restrictions or minimums, which will start on November 1.