Heineken Profits From Strong Sales in Americas and Europe 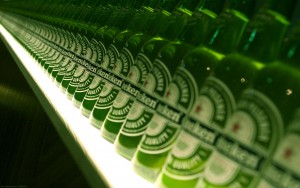 The third largest brewer in the world Heineken NV said on Wednesday that its revenues and volumes of beer grew more than had been expected during its third quarter, driven by stronger than expected sales in the Americas as well as a warmer than usual summer across most of Europe.

The brewer based in Holland, whose Heineken lager is the top seller in Europe, said its revenues expanded by 8% during the just ended third quarter to more than 5.51 billion euros or $6.08 billion. That figure beat the estimated 5.31 billion euros by analysts.

Heineken has been the beneficiary of a steady European recovery and in the growth in margins and sales in its emerging markets, such as Mexico and Vietnam.

However, the performance of the Dutch brewer has been overshadowed in the past few weeks by AB InBev, the global leader whose takeover of No. 2 SABMiller is still pending.

Nevertheless, Heineken’s shares have increased by 36% during 2015, which is the strongest gain across the industry even taking into consideration the recent SABMiller stock surge due to the approaches made by AB InBev.

Heineken announced that it sold much more beer in Brazil and Mexico and succeeded in moving the consumers to Heineken lager that is higher priced.

In Europe, the volumes were up 7% due in a large part from weather being warmer and sunnier, compared to 2014 when it was not as pleasant.

Heineken maintained its revenue growth forecast, with its volumes rising a bit slower than during 2014, and weighted down more during the second six months of the year.

The brewer has targeted its annual improvements in its operating margin of 40 basis points, but said it was not going to achieve that in 2015 due to disposing of its packaging business in Mexico.

However, it now has seen slightly lower interest and tax rates, while the positive impact on exchange rates would be lowered.

For it operational profit its full benefit would be close to 75 million euros as opposed to it earlier projection of 130 million euros.