McDonald’s Says No to McWhopper Offer by Burger King 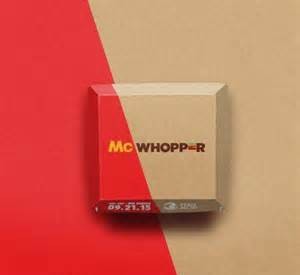 McDonald’s declined a proposal by Burger King to partner in a McWhopper for world peace.

The new burger would have combined the elements of the two chains’ famous Whopper and Big Mac burgers to create the McWhopper a new double-decker burger.

These burgers would have been only sold for one day in a franchise that would be jointly run by the employees from both companies.

Burger King wanted to tie this publicity stunt to Peace One Day a nonprofit organization that say it is a promoter of Peace Day.

In 1981, the International Day of Peace was created by the United Nations. It has its annual opening session during September. In 2001, it designated September 21 as the annual ceasefire and non-violence day.

Burger King has touted this idea in full page advertisements in The New York Times, on social media and on a Today show taste test.

However, it appears they failed to let anyone know beforehand from McDonald’s.

On the McDonald’s official Facebook page, a post signed by Steve Easterbrook the CEO at McDonald’s said we like this intention but think the two brands could produce something much bigger to make a bigger difference.

Easterbrook also chided the rival burger chain for using language of a battle to describe the competition between them, saying it paled in comparison to the pain and suffering that real war brings.

He added in a postscript that a simple telephone call would be sufficient next time.

Burger King has been struggling against McDonald’s the No. 1 chain for a number of years. A new owner in Canada has cut many costs and recently has seen an increase in sales.

As an underdog, it is very cost effective to take jabs at the leader, said a marketing analyst in the food industry. He added that by appearing to be high and mighty, McDonald’s appeared to hand a victory to Burger King.

McDonald’s has been struggling itself with sales and a menu that became too large. It just recently announced it would be offering all day breakfast this fall, after an earlier trial run in San Diego.