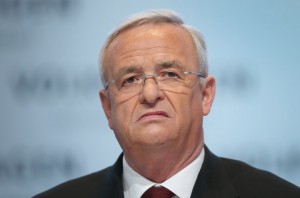 Martin Winterkorn the CEO at Germany-based automaker Volkswagen announced on Wednesday his resignation as the company is grappling with a cheating scandal regarding its emissions.

In a statement he added that he was not aware of the wrongdoing that took place.

The executive committee at Volkswagen, which is a sub panel of the full board of directors, said it would expect that other personnel would be leaving in the next couple of days as its investigation continues into how the automaker installed the software into 11 million of its diesel vehicles to avoid the emission regulations.

The committee made an extraordinary step by saying it would submit a criminal complaint about the actions of the company to German prosecutors. However, the panel said that Winterkorn did not have anything to do with the emissions software.

Volkswagen’s board was expected to appoint Winterkorn’s successor on Friday. The board’s executive committee has proposed that the complete board establish a panel that would consult with outside advisers to carry out the necessary consequences for the automaker.

The scandal has smashed the stock at Volkswagen, spawned investigation by the government, brought about lawsuits, called into question the future of the diesel vehicles it carries and raised questions about the knowledge Winterkorn had of the entire situation.

Winterkorn said Volkswagen needed a fresh start and he was clearing the way for the fresh start by resigning. He said that Volkswagen had been and will always be his life.

The company has admitted to installing software in 11 million vehicles to trick regulators into thinking the cars were compliant with the strict emissions standards of the country.

The company has set aside over $7.3 billion that will pay for the expected cost this scandal a figure it did acknowledge could very well change.

Dealers were ordered to stop selling the autos in question, which could emit harmful pollutants at rates that are as much as 40 times above the standards in the U.S.