Kaiser Bracing for Strike by Thousands 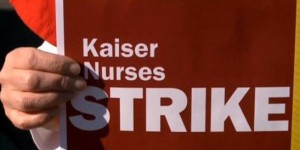 Up to 2,600 mental health workers at Kaiser, including therapists, social workers and psychologists are expected to strike on Monday.

That will start a statewide strike of one week that marks an increase in protests over what the workers charge is continued understaffing that keeps its patients waiting too long for their appointments in the mental health clinics of the giant in healthcare.

The health care workers, who are represented by National Union of Health Care Workers, have for a long period, criticized management at Kaiser over the problems in its services of mental health.

This past September, Kaiser said it would pay a fine of more than $4 million levied back in 2013 by regulators over an inadequate access to mental health services.

The patient’s crisis has exploded and is only getting worse. The union president said the workers do not want to carry out a strike, but it is being done to force Kaiser to staff appropriately.

One psychiatrist at Kaiser said if there were not enough staff on shift to provide the care needed by the patients, it feels as if we are not completing out job. It feels as if our patients are being let down, said one social worker.

Kaiser said that it had improved its services and has accused the workers’ union of attacking the company reputation and mental health services, as part of a negotiating strategy to win a better contract.

Members of the union have negotiated with the mental health care provider since 2010, when employees voted to join a new union.

Amongst other concessions, the health care workers want more of a voice in determining the staffing at mental health clinics.

However, asking workers in mental health to walk is not good for patients and not constructive for contract negotiations, said John Nelson a spokesperson for Kaiser. By walking for a week, you cannot help the patients who need your services, added Nelson.

The planned strike statewide on Monday marks the third by the workers against Kaiser for these issues. The two previous during 2011 and 2013, were for one-day only.