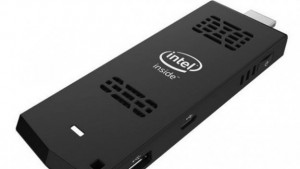 Stick computers do not impress anyone anymore and are nothing new.

Inexpensive mini computers from brands that are not popular have run the mobile operating system for Google on inexpensive however highly effective and efficient processors from AllWinner or RockChip for some time.

However, Intel is planning to step things up with its Compute Stick for $149.

The new Atom-powered, Quad-core minicomputer can run Windows 8.1 and it is about the shape and size of a normal everyday Flash Drive.

Due to be released later in the spring, the Stick has anything and everything expected in a stick computer.

The small device has a HDMI full size plug that attaches to a monitor or TV. On the side of the device, there is a small microUSB, which is used to provide power with a normal USB cable.

A full-sized USB port is on the side as well and allows peripherals to be attached easily while a card slot for a microSD provides further memory expansion if wanted.

It also contains a button for power, something traditional Android sticks do not have.

In addition, the Stick can connect with other peripherals like a mouse or keyboard using its Bluetooth capabilities. It also can support 802.11n Wireless Internet that can be used to connect to a home network and Internet.

Under the hood, the stick has a Quad-core, Atom BayTrail-T CPU, 32GBs of storage memory and 2 gigabytes of internal RAM. It includes the Windows 8.1 pre-installed. Though many stick PCs become very hot after only a short period of use, Intel claims that their stick will remain cool to touch.

The most this PC is likely to be used for is as a media server and theater PC.

Though it does not have much storage space internally for music, photos and movies, it can add up to 128GB using a microSD. Like every Windows computer, it will easily access any major streaming program, including Hulu and Netflix.