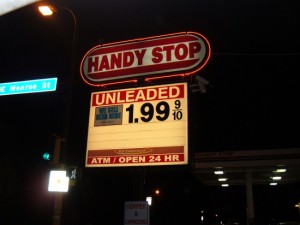 Drivers paid on average of $2.20 per gallon for regular gas at pumps in the U.S. last week. That was the lowest price for this time of the year since 2009, according to a report released on Monday.

Prices fell by 26,9 cents over a period of three weeks through January 9 and now are $1.14 per gallon below levels from one year ago during the same period.

The report is based upon information that is obtained from 2,500 gas stations by a company based in California.

Retail dropped after prices of crude oil dropped below the $50 per barrel threshold for just the first time since 2009.

OPEC members said they would not reduce their output to increased prices that have now dropped by over half since mid June.

Gasoline stockpiles in the U.S. reached 237 million barrels, which is the highest since 2011, according to data released by the government. Refineries throughout the country ran at close to 94% of capacity.

Gasoline is the lowest since April of 2009 when prices were an average of $2.054 per gallon. Over the past five years, prices on average have been $3.17 per gallon during the beginning of January.

The highest gasoline prices in the lower 48 U.S. states amongst the markets that had been surveyed in the report were located in San Francisco at $2.66 per gallon. The gas prices the report found that were the least expensive were in Albuquerque, New Mexico at $1.76 per gallon. Regular gas averaged $2.59 per gallon in Los Angeles and $2.54 per game in Long Island.

Prices of crude have fallen over 56% since June 20 of last year.

Oil output in the U.S. was up to over 9.12 million barrels per day for the week ending January 2.

Production in the U.S. increased by 66% over the past five years, as businesses have used hydraulic fracturing and horizontal drilling to tap the underground layers of hydrocarbon-rich shale rock.