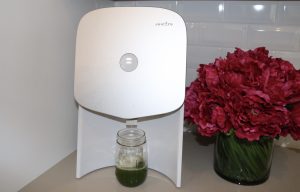 San Francisco-based startup Juicero Inc. is now offering refunds for its juicing machines after nearly a week of bad press. Juicero’s Wi-Fi-enabled machine produces cold-pressed juice out of packets sold exclusively to owners via subscription, with juice packs delivered weekly. For the next 30 days, anyone not satisfied with their Juicero machine can return it to the company for a full refund.

Juicero was one of the most lavishly funded gadget startups in Silicon Valley last year. Major investors, including Google’s venture capital arm, poured $120 million into the start-up’s coffers. Technology investors were drawn to the idea of an internet-connected device that transforms single-serving packets of chopped fruits and vegetables into a healthy beverage. Tech blogs even called it a “Keurig for juice.”

Earlier this week, a report from Bloomberg showed that using hands to squeeze the bags of produce was nearly as effective as using the $400 machine. Once it emerged that people didn’t actually need the machine to get juice from the packets, investors’ confidence waned. According to the report, four people with knowledge of the matter said Juicero didn’t broadly disclose to investors or employees that the packs could be hand squeezed. Many began questioning why anyone would be willing to pay $400 to buy one of its machines.

Juicero’s CEO Jeff Dunn says that “the value of Juicero is more than a glass of cold-pressed juice. Much more.” Juicero says that squeezing the juice bags yourself wouldn’t provide you with the full effect of all the juicing nutrients that come when its machine processes the bag. Dunn wrote, “What you will get with hand-squeezed hacks is a mediocre (and maybe very messy) experience that you won’t want to repeat once, let alone every day.”

The juice bags’ QR codes helps the company and consumers move quickly in the event of a product recall. The expiration date is also printed on the pack. The company sells the produce packs for $5 to $8. The products were only available in three states until Tuesday, when the company expanded to 17. The packs can’t be shipped long distances because the contents are perishable.

Doug Evans, the company’s founder, said he spent about three years building a dozen prototypes before coming up with Juicero’s patent-pending press. Evans said in an interview, “There are 400 custom parts in here. There’s a scanner; there’s a microprocessor; there’s a wireless chip, wireless antenna.” In 2014, Evans secured funding for his venture by showing 3D-printed renderings of the product without a working prototype. At least two Juicero investors said the machine turned out to be much bigger than what Evans had proposed.