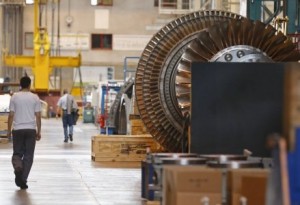 Business activity in the euro zone grew at its slowest pace in the past four months last Monday. However, one sign of encouragement for the European Central Bank, service companies increased prices for just the first time in the past four years, showed a survey on Monday.

The modest growth for the third quarter of 0.4% likely will disappoint policy makers six month into their 60 billion euros per month program of quantitative easing.

The economy in Britain, which has outpaced the rest of the euro zone, is losing steam as well, with growth in the service industry at a low of 2 ½ years likely upsetting the Bank of England as this week the Monetary Policy Committee of the bank meets.

Markit’s final PMI or Purchasing Managers’ Index for September for the common currency zone was at a low of four months of 53.6, which was weaker than an estimate earlier of 53.9.

During August, it sat at 54.3 but recently was above 50, which denoted expansion since July of 2013, and tepid signs appeared of even inflationary pressure.

However, new orders were up at a much slow rate than had been reported earlier and few jobs were added, which suggested firms were becoming increasingly less positive.

The PMI for service industry fell as well from Augusts’ 54.4 to 53.7 and lower than one of the flash estimates that came out of 54.0.

Another similar of manufacturing firms that was released last Thursday had dropped as well from 52.3 to 52.0.

An earlier PMI composite from Europe’s largest economy of Germany fell as did ones from Spain and Italy. France’s composite bucked the trend however and increased pointing to a growth of 0.2% during the third quarter, said figures released by Markit.

Headline services PMI in Britain dropped from Augusts’ 55.6 to 53.3 during September.