All-Day Breakfast to Appear on Menu at McDonald’s 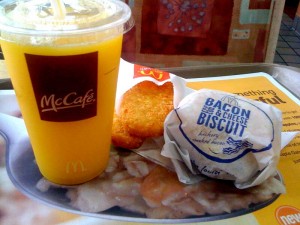 After completing successful tests in selected restaurants in San Diego, McDonald’s will be soon serving its McMuffins, Hash Browns and other breakfast menu items all day.

The behemoth of fast food companies is said to be going forward with its plan or McMuffins around the clock along with all the other breakfast menu items.

The all-day breakfast menu has been tested by McDonald’s since March. Now a memo that was distributed internally in the company has told franchises to get ready for the complete rollout of the full day breakfast in October, according to a number of reports.

A spokesperson for the world biggest burger chain said that the one request they hear most from their clients is about serving breakfast all-day long.

The spokesperson said the company was testing it out in a few other markets in order to learn a bit more about its possibility.

The chain of fast food restaurants typically will end its serving of hot cakes, hash browns and McMuffins at around 10:30 a.m. although that time period of ending breakfast can change from restaurant to restaurant.

The Big-Mac maker will go all out in its attempt to turn around its slumping sales. Restaurants across the chain have been grappling with dropping customer traffic and stiffer competitions from many different competitors.

Steve Easterbook took the reins of the company as CEO late in January. He has promised to improve the quality of food that the fast food chain serves. He also laid out his complete vision for a turnaround this past May, saying McDonald’s would experiment with new sandwiches as well as changes to how the customer can order.

For more than two years, McDonald’s has struggled with earnings and for its 2015 first quarter its earnings were down for the sixth straight quarter.

The big question is whether orange juice and McMuffins can buoy the behemoth back to growth.