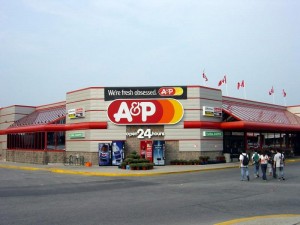 Great Atlantic & Pacific Tea Co the chain of supermarkets known more popularly as A&P has filed for Chapter 11 bankruptcy for a second time in the past five years. It said it was currently holding discussions with buyers for some stores.

The company, which is 156 years old, hired Evercore Partners a specialist in selling assets. The supermarket chain has listed its assets and its liabilities for $1 billion each in the bankruptcy filing it submitted late Sunday.

A&P announced it was in discussion with Albertsons and Safeway grocery store owner Acme Markets and key food and Shop & Save Supermarket to buy some of its assets.

The company has buyers lined up for 120 out of 296 stores with proceeds expected to total over $600 million. The company, which is the owner as well of Pathmark, Superfresh and Best Cellars stores, had not be able to stand up to the behemoths in the industry such as Costco Wholesale and Walmart Stores, who attract customers with large discounts.

In addition, wealthier shoppers were lured away by other high-end stores like Whole Foods Market.

A&P received financing known as debtor in possession of more than $100 million. The company employs close to 34,000, according to their website.

The supermarket chain, which during its heyday in the early 20th century, had more than 15,000 stores, filed first for bankruptcy protection during 2010 and re-emerged 24 months later a private company after it obtained financing from Goldman Sachs and an affiliate to billionaire Ron Burkle.

The company was originally founded in 1859 as a small mail order business by spice and tea merchants George Gilman and George Huntington Hartford. In that same year, it opened the first store operation.

The supermarket chain operates in Maryland, Delaware, Pennsylvania, New Jersey, New York and Connecticut under the names of Waldbaum’s, Pathmark and others.

Typerium Trading Down 20.8% Over Last 7 Days