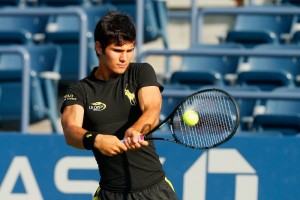 The sensor-laden shirts by Ralph Lauren are finally being manufactured in masses providing the masses will pay $295 for the workout shirt.

At an event held this week in New York City, the brand revealed the pricing as well as availability for the PoloTech line of apparel made in collaboration with OmSignal a tech startup based in Montreal.

The workout shirt designed as a second skin has silver fibers directly woven in to the shirt close to the wearer’s rib cage and a tiny black box filled with sensors that is strapped inside the shirt to track the biometric stats such as heart rate, steps taken, energy exertion and breathing depth.

The biometric shirt was first shown off by Ralph Lauren at the U.S. Open tennis tournament last year in New York City using the ball boys as their guinea pigs. One player who is top ranked, Marcos Giron, wore the shirt while practicing as well.

Since then more biometric shirts have appeared including ones using the micro-EMG sensors that measure muscle effort and made by the Redwood City-based company Athos.

David Lauren the EVP for marketing and advertising at Ralph Lauren announced that the smart shirts for women would be on their way.

The apparel maker is working on the design of more casual connected clothing such as the polo shirt that could be used all day, not only for exercise. Lauren said that even a smart suit was a possibility as well.

There is a mobile app by Ralph Lauren that syncs the date from its PoloTech shirt. It is iOS only to start, and does not integrate with other fitness apps that are third party.

Still, the goal with this app is offering analysis that is real time and workout suggestions that are based on biometrics that are being shown.

This means the apparel maker is aware of one big problem with connected devices for health and fitness: there are many that can track what is done, but few that tell you what should be done next.