Many Greeks Not Happy With New Government 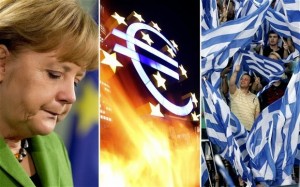 The equity markets in Europe might be happy about a deal that extended the aid for Greece by another four months, but many of the ordinary Greeks feel their new government backtracked from the promises it made to eliminate the bailout.

The left-wing Greek government led by Alexis Tsipras the Prime Minister, was given a new lifeline on Friday when the finance minister of the eurozone reached an accord to extend the bailout for the country by four months. Now the country is scrambling to present its list of proposed reforms to secure the lifeline.

However, some people in Greece have accused the government of backing off its promises during the election that it would rip up the memorandum of the bailout, overseen by the troika or the European Commission, European Central Bank and the International Monetary Fund.

Tsipras when speaking about the deal, said that Greeks won a battle but the war continues, with international lenders and the real difficulties were ahead.

However, Tsipras has not only been the brunt of criticism for attempting to present the new deal as a victory for his country, but has been accused of only overseeing a change of the names for the financial bailout

Troika will now be called institutions and the former memorandum of understanding has been changed to the agreement.

One Greek said he was incredibly angry since just the two names were changed while the financial end of the deal remains the same.

Another Greek went further by calling the new agreement treason. He said that whoever signed the new bailout and reform measures were nothing more than collaborators and the Greek people would judge them for ultimate treason.

Despite the new deal, Greece remains at the mercy of members of the Eurogroup. On Monday, when receiving the list of reform measures proposed  by Greece, its creditors will either give their approval or deny the bailout extension and whether the reforms were enough to allow the releasing of more financial aid to the country.