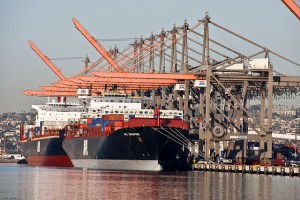 Negotiators have reached a tentative agreement for a new contract covering the dockworkers on the West Coast, which will likely end a long drawn out labor dispute that has snarled international trade at different seaports that combined handle close to $1 trillion annually of cargo.

The agreement was reached following 9 months of negotiations that became contentious this past fall, when employers and the dockworkers started to blame one another for the problems getting imports to U.S. consumers and exports to all points overseas.

Friday’s tentative contract still must be approved by the more than 13,000-member International Longshoremen and Warehouse Union.

They are employed at 29 ports from Seattle south to San Diego that handle nearly 25% of all international trade done by the U.S., with a large amount done by China.

Thomas Perez the Secretary of the labor, who started to oversee the talks this week, where both the maritime association and union associates are based in San Francisco, said both the employers and dockworkers union agreed to resume work on Saturday morning.

As both sides quarreled, employers ended paying for weekend work, saying not extra wages would be paid. With many ships as well as cargo weeks behind, Perez said he felt many would be getting extra time until everything is back to schedule

Dozens of ships full of imported goods are using the water off some ports as parking lots. It is estimated that it could take weeks and possible months before the traffic jam of containers is unlocked.

President Obama applauded the agreement and urged the participants to work together clearing the backlogs. Chief negotiators for both sides called the deal good for both the industry and the workers.

A vote by members of the union could come as early as April. The full maritime association also must approve the new deal.

Neither of the two sides released any information but in one recent letter the agreement included nearly no cost covered for health insurance, an increase of $11,000 in maximum benefits for pension to over $91,000 and a wage increase of $1 per hour over each of the upcoming five years.