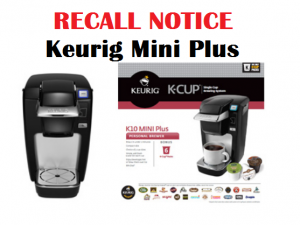 Keurig had recalled over 7 million Mini Plus Brewing Systems that brew single serve coffee after dozens were injured by spraying liquid that was hot.

The group of faulty brewing machines had been produced between 2009 and 2014. The company received over 200 complaints about the system from users. Out of the 200, 90 of the complaints are burn related.

According to the Customer Safety Commission in the U.S., the faulty brewer is known to overheat and then spray hot water.

Keurig, according to Health Canada has received 17 minor burn incidents.

A spokesperson for Keurig said the company was working to determine the number of reports in both the U.S. as well as Canada that were related to problems that were linked to the recall.

The company has asked its customers to send contact information so they can send them a repair kit, which the company believes, will solve the current malfunction.

The two models that have problems with overheating and spraying hot water are the B31 and K10.

The purchasers of the units have been told that the models that have an ID #31 on the bottom of the machine are the faulty unit.

Keurig warned that customers should not use the machine to make more than two cups at one time.

This model was sold in the Internet for $100 and through various retailers across Canada and the U.S.

All of the Mini Plus brewing machines are 11 inches in length and offer three brewing sizes: 6, 8 and 10 ounces.

The machines were manufactured by Keurig Green Mountain Inc a company based in Vermont.

Shares of stock at Keurig were down by 2.2% following the release of the recall news by the company.

Customers can also receive the report kit by calling the phone number listed on the company website.