Sony Says The Interview Will Be Aired 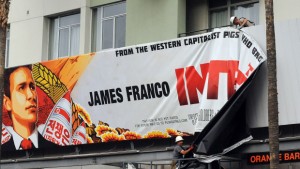 It looked at one time like Sony was bowing down to hackers threats that The Interview could never be released.

However, that is not the case, says a Sony Pictures attorney.

David Boies said that Sony has only delayed its release.

He was referring to the decision by Sony to cancel the release on Christmas Day of the movie by pulling it from theaters.

That had followed the decision by the largest theater chains in the U.S. not to show it because of a post online that threatened a bad fate to those who saw the controversial comedy.

The owners of the theaters feared that audiences for other movies would remain at home Christmas, a day when Americans flood to the cinema.

However, Sony is being pressured to have the movie released somehow.

Sony has fought to have the movie distributed and it will be, said its executives. No one is quite sure how, but it will eventually be distributed.

Sony representatives did refute a report that the company is planning to release the film on Crackle for free. Crackle is a video site online owned by Sony.

Crackle makes its money through advertisements but not subscriptions the rental of movies or videos. That would therefore limit the potential revenue and Sony has spent a reported $44 million making the film.

However, the company statement did not rule out using Crackle, it just said not firm plan had been in place.

CEO of Sony Entertainment Michael Lynton in an interview last Friday said the movie studio had not given up or given in to the pressure of the computer hackers and was still looking into ways of distributing the film.

Besides possibly using Crackle, other options include releasing the movie to theaters that are willing to show it and distribution through a service on cable of video on demand or a streaming service online such as Netflix, YouTube or Hulu.

On Friday, President Obama said he thought a mistake had been made by pulling the film and the Republican National Committee on Saturday urged owners of theaters to show the movie.