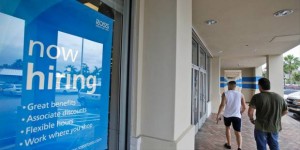 The number of people in the U.S. filing new unemployment benefit claims was slightly higher than expected during last week, but the overall trend continued suggesting that the labor market was still tightening.

The jobs market has strengthened despite the economy remaining sluggish that is characterized by tepid spending by consumers as well as weak manufacturing activity and business investment.

Initial claims for state benefits for unemployment were up 10,000 to a 274,000 seasonally adjusted number for the week ending May 16, said the Labor Department on Thursday, Claims for the week prior were not revised.

Despite the increase last week, claims remained under the 300,000 threshold associated with a labor market that is still strengthening, for an eleventh consecutive week. Economists had forecast that claims would rise to 271,000.

The steady labor market is keeping the Federal Reserve online to increase interest rates later in 2015. Minutes of the central bank’s meeting in April released Wednesday showed the majority of policymakers saw little chance of a rate hike for June.

The moving average for four weeks for unemployment claims is considered a better labor market measure as it irons out volatility that can take place from week to week. That figure dropped by 5,500 last week and at 266,250 is sitting at its lowest since April of 2000.

Outside energy, which has lost many jobs since the beginning of the year, as oilfield companies such as Baker Hughes, Halliburton and Schlumberger respond to lower prices of crude, layoffs have been minimal.

A mix of a strong dollar, bad weather, deep energy cuts in spending and port disruptions weighed on the U.S. economy during the first three months of 2015, with output hardly expanding.

Manufacturing data and retail sales suggest that while the overall activity is increasing, the pace is still modest. Payrolls rose in April by 223,000 and the rate of unemployment dropped to a low of seven years to 5.4%.

The report on claims released Thursday showed the amount of people still receiving benefits following an initial week of aid dropped by 12,000 to just over 2.21 million.