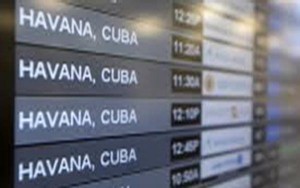 The United States has resumed diplomatic relations once again with Cuba for just the first time in over 50 years. That has caused airlines to seize a huge opportunity to carry Americans to the Caribbean island nation that for the majority remains a mystery.

The White House eased travel restrictions to Cuba, which allows American who fall within 12 approved categories to travel to the island.

This past week President Obama also announced that the U.S. and Cuba would be opening embassies in each other’s countries.

JetBlue has flown charters to Cuba since 2011 through the authorized businesses. President Obama took steps to lift the travel restrictions by giving Americans permission to visit Cuba on people-to-people authorized tours.

JetBlue is already operating four weekly flights round trip between Florida and destinations in Cuba such as Santa Clara and the capital of Havana. The airline, which is based in New York, had its inaugural flight from JFK airport direct to Havana on Friday night. That flight will be once per week. The airline is booking charters through Cuba Travel Services, ABC Charters, and Xael Charters for its flights.

By adding to its flights, JetBlue has strengthened its position in Cuba, which could pay them big dividends once regular airline flights are once again allowed. JetBlue’s presence throughout much of the Caribbean is already strong.

Even though a charter service is needed by travelers to purchase tickets, they receive the same experience as any other JetBlue flight said the airline.

Flights often times are filled with Cubans living in the U.S. but wanting to reunite with their relatives.

JetBlue employees are not allowed to explore Cuba, but shortly are expected to be able to look around the island.