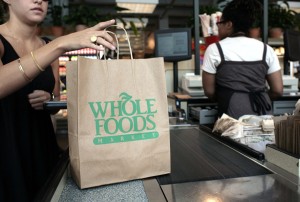 Executives of Whole Foods are admitting that the chain has overcharged New York City customers, but promised that if it were to happen against they will give the food away for free to customers.

Walter Robb and John Mackey, Whole Foods co-CEOs, apologized to their customers through a video that was filmed in the fruit sections of one of the stores in the chain.

The casually dressed two execs admitted that some of their customers were overcharged accidently for fresh squeezed juices, sliced fruit and certain sandwiches through errors by workers.

Robb said that straight up errors were made. He spoke while framed by sliced strawberry containers and containers that contained sliced pineapples and kiwis.

Mackey added that there were a very small percentage of errors in weighing made by their employees in prepping and pricing the food.

We know the errors were unintentional because their mistakes were both in the store’s and the customer’s favor, added Rob.

This admission followed an investigation that recently ended by the Consumer Affairs Department of New York City, which uncovered what it called a systematic overcharging for foods that are pre-packaged.

The inspectors tell us this was the worst mislabeling case they saw in their careers, said Julie Menin the DCA commissioner.

The city said it only found a few instances where customers had benefitted from food that was underpriced. Mackey however said that Whole Foods would increase its training nationwide because we need perfection in this particular area, as we do not want any mistakes in the area going forward.

He offered a guarantee of 100% to its customers if there were mistakes that are not in your favor and he promised that the food would be given to them free of charge an error were discovered.