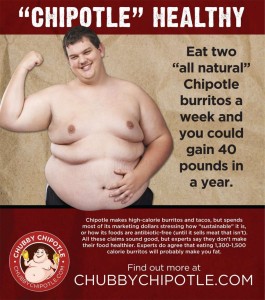 An advocate for consumer rights published an advertisement of a full page in the New York Post as a means of a visual attack against Chipotle the Mexican food fast casual food chain, igniting a social media firestorm.

The CCF or Center of Consumer Freedom produced the full page ad that depicts an overweight man who is smiling and naked from the waist up who is flexing an arm while resting his other arm on his stomach.

The CCF is a group that calls itself dedicated to protecting the choices of consumers and promoting common sense.

In the ad, the center criticized blatantly the burrito chain through urging consumers to visit the site ChubbyChipotle.com where its calls executives at Chipotle fast food hypocrites.

The ad emphasized as well that by eating two of Chipotle’s all natural burritos per week, consumers would gain over 40 pounds per year.

The ad also highlighted the fact that marketing by Chipotle is unscientific and is harmful to animal welfare.

The advocacy group believes Chipotle holds a great deal of misconceptions about its food and that the center’s mission is to face the misconceptions.

Chipotle announced it was committed to using ingredients that were the most ethical and to stop the use of genetically modified organisms.

It also said it would stop serving pork when its supplier did not meet the food chains standards.

The research director at CCF Will Coggin said that Chipotle has built the idea that somehow the food they serve is better for the consumer that it is healthier.

At the same time, the Mexican burrito chain is positive that the CCF ad is a deliberate effort to smear the company.

A spokesperson for Chipotle said he believes the CCF is nothing more than a group that is agenda drive backed by unknown parties.

However, the CCF denied the allegation of being hired by a rival chain or one person.