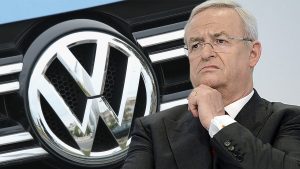 Volkswagen (VLKAY) former CEO Martin Winterkorn has been revealed to be the target of a criminal investigation into the automaker’s diesel-emissions scandal. German prosecutors are investigating whether Winterkorn violated securities laws and manipulated the market with his actions. Winterkorn resigned days after the crisis erupted, saying he was doing so “in the interests of the company even though I am not aware of any wrongdoing on my part.”

The prosecutor’s office in Brunswick, Germany, in VW’s home state of Lower Saxony, started the investigation at the behest of Germany’s Federal Financial Supervisory Authority, the country’s financial watchdog. According to German stock market law, publicly traded companies must alert investors as soon as they gain knowledge of unforeseen developments that could affect a decision to buy or sell the stock. Prosecutors said that there was evidence that the disclosure obligation should have been fulfilled earlier than Sept. 22, when Volkswagen made their notification.

Volkswagen has admitted equipping cars with software that sensed when the car was on a test stand and turned off emission controls during normal driving. The scandal came to light after an outside study conducted by the International Council on Clean Transportation found irregularities in the company’s emissions testing. On September 18, the U.S. Environmental Protection Agency issued a violation notice.

Volkswagen acknowledged in March that a memo on the matter was delivered to Winterkorn on May 23, 2014. The company also admitted that Winterkorn was told directly about the diesel irregularities in a meeting July 27, 2015. Last year, Volkswagen hired the Jones Day law firm to conduct an internal investigation into its actions. Volkswagen has repeatedly said it is cooperating with investigators and that it met its disclosure obligation.

The scandal has spawned numerous investigations, including a criminal probe by the U.S. Justice Department. The company is expected to reveal details of a civil settlement with U.S. regulators next week. The settlement is expected to involve billions of dollars in compensation and repairs. Volkswagen is the second-largest automaker in the world and the scandal affects roughly 11 million vehicles sold worldwide.

A current member of Volkswagen Group’s management board is also being investigated as part of the criminal probe. The prosecutor’s office declined to name the name of the current board member under investigation, but did say that the subject was not current VW Chairman Hans Dieter Poetsch. Poetsch was chief financial officer of the company under Winterkorn.