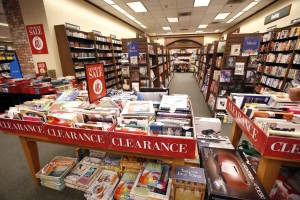 Quarterly profit at Barnes & Noble missed estimates by analysts as the chain of bookstores invested in its business specializing in college books prior to its spinoff and paid more in taxes.

Barnes & Noble, which last month announced it would separate its college books business before August, saw its stock fall by 7.5% during Tuesday morning trading on Wall Street.

The largest chain of bookstores in the U.S. had planned earlier to spin off its growing as well as profitable business with its e-book and Nook tablets business.

B&N paid over 55% more in income tax during the third quarter that ended January 31, as it purchased the stakes in December of Pearson Education and Microsoft Corp, two partners in Nook Media.

On Tuesday, Barnes & Noble said it expects its comparable sales for its college business to be flat for the year, which ends April. That is better than its earlier forecast of a decline in the low-single digits.

Earnings prior to taxes, interest, amortization and depreciation declined 20% to end the third quarter at $28.1 million. The net income for the company was up 14% to just over $72.2 million equal to 93 cents a share, while revenue dropped by close to 2% ending at $1.96 billion.

On average, analysts were expecting B&N to earn a profit of $1.23 a share with revenue coming in at $1.92 billion.

The college textbook part of the business posted $521 million in quarterly revenue, which was 7.2% higher than the same period one year ago.

Shares over the past year at B&N are flat despite a big selloff on Tuesday.

With the planned spinoff of its college unit, B&N could be taking away its growth driver. Revenue is projected to fall 5% for the year, which will put pressure on the ability of the company to hold down costs.