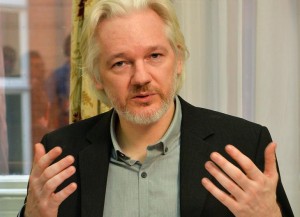 Prosecutors in Sweden have made a huge concession in the investigation of WikiLeaks founder Julian Assange. The Swedish authorities have offered to question Assange at his sanctuary in London, the Ecuadorian embassy, about alleged sex crimes, instead of insisting he be extradited back to Stockholm.

Prosecutors now say they are willing to visit Assange in London despite it not being 100% according to what they want for the investigation.

Assange has lived inside the Ecuadorean embassy since June of 2012. By living there, he has avoided extradition back to Sweden. He vigorously denies all the charges, but fears that traveling back to Sweden would lead to being extradited to the United States to face trial for releasing military and diplomatic information.

One of the defense lawyers for Assange, Per Samuelson, said he welcomed the prosecutors move and said his client would likely accept that offer after it is reviewed in detail. He spoke to Assange earlier on Friday.

Samuelson said that his client has wanted this for more than four years. He said Assange wants an interview so he will be exonerated, so yes this is welcomes to them.

Prosecutors in Sweden said they want to take a sample of Assange’s DNA, although they would not say why.

The direct or prosecutions, Marianne Ny said she reluctantly made this offer to Assange.

She said the interview quality would be lowered by having it at the embassy in London and that he would have to be in Sweden for the case to be tried.

Ny dismissed all claims of any involvement of the U.S. in the investigation with Sweden. If Assange agrees to this request, an interview would be held by Ingrid Isgren the lead prosecutor and a police officer.

Though he was given political asylum by Ecuador over two years ago, Assange has not been able to leave the England because Britain had refused to give him safe passage to the South American country, which means he could be arrested the moment he left the embassy.