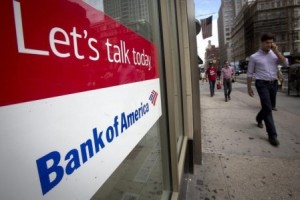 Bank of America is to be fined $30 million for the violation of the consumer’s protection with regard to collecting debt from military personnel.

Treasury Department division, the Office of the Comptroller of the Currency made the announcement late last week of the civil penalty.

BOA is the second largest bank in the U.S. and also agreed it would refund some customers the excess fees and interest payments they had been charged.

The OCC said that Bank of American started taking the necessary steps to correct these problems and was committed to continuing until the problem was resolved.

The violations were reported to have involved over 73,000 bank accounts that belong to members of the military.

Regulators said that between 2006 and this year, the bank has taken improper legal action against members of the military for overdrafts and delinquent credit cards accounts.

For instance, the OCC said in many of the cases the bank filed legal actions on the accounts against the client in order to collect the debt, employees signed the documents saying they had knowledge of those allegations when the fact was they did not.

Bank employees filed some documents in the court without properly having them notarized according to the OCC.

The government agency said that Bank of America did not have the effective policies or procedures in place to ensure compliance with the Service Members Civil Relief Act, which mandates a number of special protections for members of the military.

The law limits banks how much interest they can charge on the accounts of service members while they have been deployed and banks cannot repossess vehicles, or foreclose on homes with first obtaining a court order.

The Charlotte, North Carolina based bank said it would continue to improve compliance with that law.

A prepared statement by the bank said that it had taken significant steps during a number of years and is taking more now that will ensure the correct controls and corresponding processes are in place to meet as well as exceed requirements of the law and what military customers both expect and deserve.

$238.70 Million in Sales Expected for Whiting Petroleum Co. This Quarter