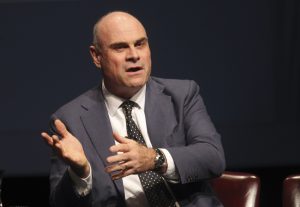 American International Group Inc. (NYSE:AIG) CEO Peter Hancock officially announced his departure from the company this week after just two-and-a-half years at the helm. In a statement, Hancock stated that he couldn’t continue without shareholder support. Hancock said, “Without wholehearted shareholder support for my continued leadership, a protracted period of uncertainty could undermine the progress we have made and damage the interests of our policyholders, employees, regulators, debtholders, and shareholders.” Hancock will remain as CEO until a successor is named.

Hancock made the decision after the company reported a poor financial performance that frustrated shareholders and the insurer’s board of directors. According to reports, he quit during a board meeting to decide whether he should stay. According to AIG’s 2016 proxy filing, Hancock could receive an exit package of $20.4 million or $31.5 million, depending on a determination by the board on whether his reason for leaving was “good.”

Before the financial crisis, AIG enjoyed a robust stature and profitability. Since the early 2000s, the insurance giant has seen its value drop from $240 billion to $66 billion, a loss of $174 billion. During the financial crisis, the company required a $185 billion federal bailout to save it from bankruptcy. That money has since been repaid in full.

Now, billionaire activists Carl Icahn and John Paulson may renew their campaign to split the troubled insurance company. During the latter months of 2015, Icahn and Paulson demanded that AIG split into three companies. Icahn argued that AIG was “too big to succeed,” and should split into separate property and casualty, life, and mortgage coverage insurers. Paulson predicted the total value of the spinoffs and the original AIG, holding the P&C business, would have a value 66 percent higher than AIG’s stock price at the time they recommended the breakup.

In January of 2016, Hancock and the board developed a recovery plan designed to substantially lower losses and bring AIG in line with its best-performing peers by the close of 2017. As part of the deal, AIG invited Paulson and an Icahn representative to join the board. Then, in early 2016, AIG disclosed that its loss ratio was substantially worse than it originally estimated.

Icahn was one of the shareholders who wanted to replace Hancock. He posted a tweet saying, “We fully support the actions taken today by the board of AIG.”