Equities analysts expect that FactSet Research Systems Inc. (NYSE:FDS) will post $404.98 million in sales for the current quarter, according to Zacks. Five analysts have provided estimates for FactSet Research Systems’ earnings. The highest sales estimate is $405.55 million and the lowest is $404.00 million. FactSet Research Systems reported sales of $383.59 million during the same quarter last year, which indicates a positive year-over-year growth rate of 5.6%. The firm is scheduled to issue its next earnings report before the market opens on Tuesday, September 28th.

On average, analysts expect that FactSet Research Systems will report full-year sales of $1.58 billion for the current financial year, with estimates ranging from $1.58 billion to $1.59 billion. For the next fiscal year, analysts expect that the firm will report sales of $1.67 billion, with estimates ranging from $1.65 billion to $1.69 billion. Zacks’ sales calculations are an average based on a survey of sell-side analysts that that provide coverage for FactSet Research Systems.

FactSet Research Systems (NYSE:FDS) last posted its earnings results on Monday, June 28th. The business services provider reported $2.72 earnings per share for the quarter, missing the Zacks’ consensus estimate of $2.75 by ($0.03). The business had revenue of $399.60 million during the quarter, compared to analyst estimates of $397.72 million. FactSet Research Systems had a return on equity of 44.88% and a net margin of 24.80%. The company’s revenue was up 6.8% on a year-over-year basis. During the same quarter in the prior year, the company earned $2.86 EPS.

The business also recently declared a quarterly dividend, which was paid on Thursday, September 16th. Investors of record on Tuesday, August 31st were given a $0.82 dividend. The ex-dividend date of this dividend was Monday, August 30th. This represents a $3.28 dividend on an annualized basis and a yield of 0.88%. FactSet Research Systems’s dividend payout ratio is presently 30.17%.

FactSet Research Systems Inc (the “”Company”” or “”FactSet””) is a global provider of integrated financial information, analytical applications and services for the investment and corporate communities. Since inception, global financial professionals have utilized the Company’s content and multi-asset class solutions across each stage of the investment process.

See Also: What are momentum indicators and what do they show? 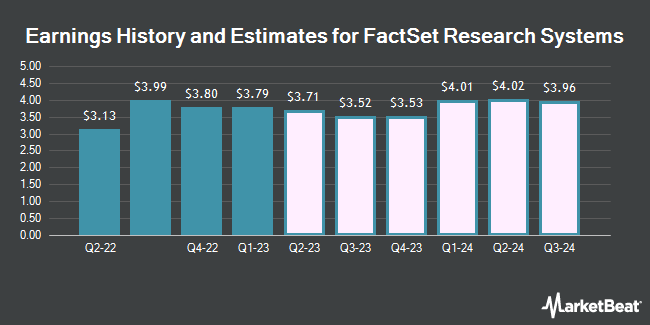 Complete the form below to receive the latest headlines and analysts' recommendations for FactSet Research Systems with our free daily email newsletter: