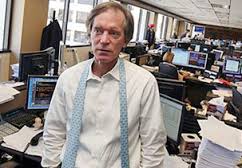 William Gross, who was the person responsible for building Pimco into one of the world’s biggest money managers and has been referred to as the bond king, has announced he has quit the company he founded and will now join Janus Capital.

Gross’ departure is very surprising and follows a number of months of questions about the style of leadership he has and the performance of his funds as investors have pulled money from Pimco.

In addition, an inquiry by the Securities and Exchange Commission has been started into whether an exchange traded fund of $3.6 billion that Gross actively managed inflated how it performed.

Gross, who is 70, turned his resignation in to Pimco and the parent company Allianz on Friday. Gross will now work out of Denver where rival Janus ha its base and will meet with executives in his new company.

Allianz appears as if they were caught off guard by the resignation handed in by Gross and the announcement he was heading to Janus.

At Janus, Gross will manage a bond fund that was recently started and related strategies. He will hook up with Myron Scholes as well as other Janus team members that are focused on allocation of global assets.

He eventually will work out of a new office for Janus in California at Newport Beach.

Gross said in a prepared statement that he looked forward to putting his complete focus on fixed income markets as well as investing and giving up many complexities that go hand in hand with the management of a complicated and large organization.

He said he decided on Janus because of the longstanding respect and relationship he has for Dick Weil the CEO and his desire to return to managing assets for clients.

The sudden departure by Gross would seem to be leaving a huge void at Pimco’s helm, one of the biggest money managers in the world, with over $2 trillion under management in assets.

Most on Wall Street believe that Mohamed El-Efrian would be the likely successor to Gross, but he too announced his own departure.