Shares of Vital Farms, Inc. (NASDAQ:VITL) have earned a consensus rating of “Hold” from the six brokerages that are currently covering the firm, Marketbeat Ratings reports. Four investment analysts have rated the stock with a hold rating and two have given a buy rating to the company. The average 1-year price objective among brokers that have issued a report on the stock in the last year is $24.60.

A number of research firms recently commented on VITL. Zacks Investment Research downgraded Vital Farms from a “buy” rating to a “hold” rating in a report on Wednesday, August 25th. BMO Capital Markets dropped their price objective on Vital Farms from $30.00 to $25.00 and set a “market perform” rating for the company in a report on Wednesday, August 11th. They noted that the move was a valuation call. Finally, Cowen began coverage on Vital Farms in a report on Friday, September 10th. They issued an “outperform” rating and a $23.00 price target for the company.

In other news, Director Brent Drever sold 453,421 shares of the company’s stock in a transaction dated Thursday, August 19th. The stock was sold at an average price of $17.00, for a total transaction of $7,708,157.00. The transaction was disclosed in a legal filing with the Securities & Exchange Commission, which is available through this link. Also, Chairman Matthew Ohayer acquired 5,000 shares of Vital Farms stock in a transaction dated Friday, September 10th. The shares were purchased at an average cost of $17.10 per share, with a total value of $85,500.00. Following the completion of the transaction, the chairman now directly owns 8,060,494 shares of the company’s stock, valued at $137,834,447.40. The disclosure for this purchase can be found here. 41.30% of the stock is owned by corporate insiders.

Vital Farms (NASDAQ:VITL) last released its quarterly earnings data on Tuesday, August 10th. The company reported $0.09 EPS for the quarter, beating analysts’ consensus estimates of ($0.01) by $0.10. The business had revenue of $60.32 million during the quarter, compared to the consensus estimate of $57.75 million. Vital Farms had a return on equity of 5.68% and a net margin of 3.66%. As a group, equities research analysts expect that Vital Farms will post 0.05 earnings per share for the current year. 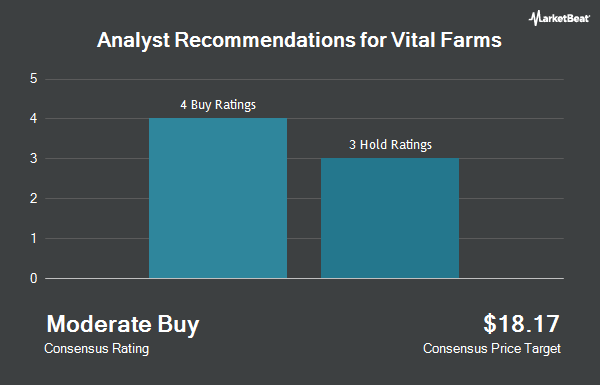 Complete the form below to receive the latest headlines and analysts' recommendations for Vital Farms with our free daily email newsletter: