UPS Shares Down After Company Warns of Lower Profit 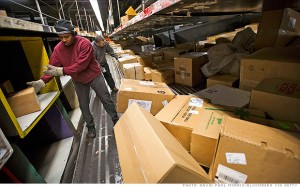 Shares of UPS were down nearly 2% to $99 per share in midday trading after the company announced that its fourth-quarter profit will likely come in lower than what had been expected. UPS said its U.S. results were hard hit by a shortened holiday season and an unprecedented level of online shopping.

This after the company announced that it used 85,000 temporary employees which was 30,000 more than planned and that it delivered more than 31 million packages on December 23 a 13% increase over the prior year peak day.

This year’s highest delivery day occurred six days later than expected and was 7.5% greater than planned. UPS Actually benefited from a bigger than expected surge in online shopping and put somewhat of a strain on its infrastructure and its ability to keep up with demand.

Despite lower profit in the fourth quarter the company expects its 2014 earnings per share to grow in line with analyst estimates of 10 to 15%.