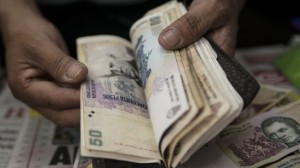 It looks as though on Monday Argentina will have a technical default after a judge in federal court said the attempts by the South American country to meet their payments of interest on its debt that has been restructured via Bank of New York were illegal.

Thomas Griesa the District Judge said the bank in New York should return a deposit made in the amount of $539 million by the South American country on Thursday.

The funds had been intended to cover the payments on interest of close to $832 million to bondholders who did take part in the previous restructuring of debt, which comes due June 30.

The Judge called the decision by Argentina to deposit the payment an explosive action violating the court orders previously, which determined holdout investors and those holding restructured debt receive payments simultaneously.

The Judge said the payment was therefore illegal and cannot be made, on Friday during a New York hearing.

The judge said that any attempt to pay the holders of the restructured debt would be charged with contempt and ordered that BNY Mellon not accept the deposit and return it to Argentina.

Legal counsel representing the investors including NML Capital a subsidiary of Elliot Capital, owned by Paul Singer a U.S. billionaire condemned Argentina’s deposit saying the country contemptuously and defiantly violated the orders of the Judge.

Axel Kicillof the Minister of Economy in Argentina said the government proceeded with its payment, which included the deposits into two BNY Mellon accounts with the central bank as a sign it was willing to comply with the bond contracts terms.

The failure to make the deadline of June 30 would put the country into a technical default although there remains a grace period of 30 days to avoid a formal default, which would be the second in the past 14 years.

The government in Buenos Aires has said that it is not able to meet the payment of $15 billion that it claims the ruling by Judge Griesa will generate. The holdouts did not take part in the two previous debt restructurings by Argentina.