Tootsie Roll Industries, Inc. (NYSE:TR) announced a quarterly dividend on Thursday, September 23rd, Wall Street Journal reports. Shareholders of record on Tuesday, October 12th will be paid a dividend of 0.09 per share on Thursday, October 21st. This represents a $0.36 annualized dividend and a yield of 1.19%. The ex-dividend date of this dividend is Friday, October 8th.

In related news, major shareholder Leigh R. Weiner sold 285,459 shares of the firm’s stock in a transaction that occurred on Friday, August 20th. The stock was sold at an average price of $34.55, for a total transaction of $9,862,608.45. The transaction was disclosed in a legal filing with the Securities & Exchange Commission, which is accessible through this link. 67.90% of the stock is owned by company insiders.

An institutional investor recently raised its position in Tootsie Roll Industries stock. Morgan Stanley increased its holdings in shares of Tootsie Roll Industries, Inc. (NYSE:TR) by 28.1% during the second quarter, according to its most recent Form 13F filing with the Securities and Exchange Commission. The firm owned 121,267 shares of the company’s stock after acquiring an additional 26,606 shares during the quarter. Morgan Stanley owned approximately 0.18% of Tootsie Roll Industries worth $4,112,000 as of its most recent SEC filing. 18.98% of the stock is currently owned by institutional investors and hedge funds.

See Also: How does new data get added to a blockchain? 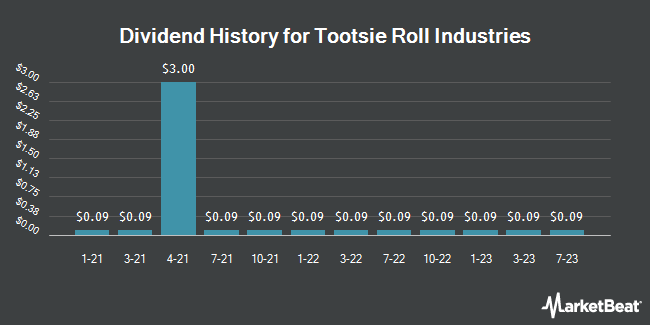 Complete the form below to receive the latest headlines and analysts' recommendations for Tootsie Roll Industries with our free daily email newsletter: