The Trade Desk (NASDAQ:TTD) Upgraded to Buy by Truist

Truist upgraded shares of The Trade Desk (NASDAQ:TTD) from a hold rating to a buy rating in a research note released on Tuesday morning, The Fly reports. The brokerage currently has $620.00 price objective on the technology company’s stock, down from their prior price objective of $880.00.

The Trade Desk shares are set to split on Thursday, June 17th. The 10-1 split was announced on Monday, May 10th. The newly minted shares will be distributed to shareholders after the closing bell on Wednesday, June 16th.

The Trade Desk (NASDAQ:TTD) last issued its quarterly earnings results on Monday, May 10th. The technology company reported $1.41 earnings per share (EPS) for the quarter, topping analysts’ consensus estimates of $0.34 by $1.07. The business had revenue of $219.80 million for the quarter, compared to the consensus estimate of $217.28 million. The Trade Desk had a return on equity of 19.65% and a net margin of 19.31%. The business’s quarterly revenue was up 36.8% on a year-over-year basis. During the same period in the prior year, the firm posted $0.90 earnings per share. On average, equities analysts forecast that The Trade Desk will post 3.12 earnings per share for the current year.

The Trade Desk, Inc operates as a technology company in the United States and internationally. The company operates a self-service cloud-based platform that allows buyers to create, manage, and optimize data-driven digital advertising campaigns in various ad formats and channels, including display, video, audio, in-app, native and social, and on various devices, such as computers, mobile devices, and connected TV. 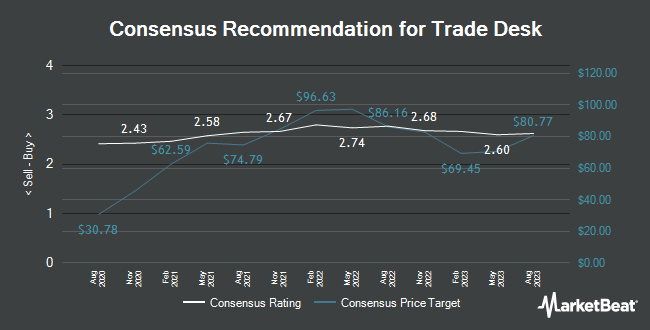 Complete the form below to receive the latest headlines and analysts' recommendations for The Trade Desk with our free daily email newsletter: