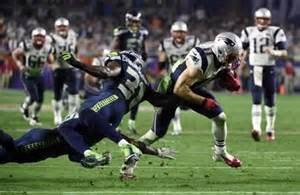 The controversial almost hilarious Deflatgate has not let any air out of the sales of the Super Bowl advertising prices, which have reached yet another record high.
Advertising for the Super Bowl was already more lucrative than ever before and this season’s game will be no different as it was announced by CBS that 30-second spots will cost $5 million. The announcement was made by CBS CEO Les Moonves during an earnings call with investors on Wednesday.
That is price for next February’s Super Bowl 50, which will be celebrating its golden anniversary and is biggest game of each year for football at any level.
CBS will be broadcasting the game and in what is an unprecedented move, will have a live stream of the ads in addition to them airing on TV.
CBS has packaged the ads so the cost of $5 million buys the airtime as well as the live streaming.
This year’s rate easily beats the previous record set last season of $4.5 million for a spot of just 30 seconds.
That is the amount NBC charged for Super Bowl 49 this past February, which was a half a million dollars more than was charged the year before for Super Bowl 48.
Prices of ads have increased each year along with the increased viewership of the game. This past Super Bowl between New England and Seattle had the largest every audience. Streaming set a record as well.
Moonves said he thanks the ratings for the Super Bowl because he knows he will already win the rating season for 2015-16.
Super Bowl 49 had its controversy with allegations that Tom Brady the New England star quarterback had deflated balls deliberately during the AFC Championship game in which they defeated the Indianapolis Colts this past January.
New England won the Super Bowl over Seattle.
The league suspended Brady for the first four games of this season, but he and the Super Bowl was helped by the controversy and is more popular than any time previously.