Tyme Technologies Inc (NASDAQ:TYME) CEO Steve Hoffman sold 51,000 shares of the stock in a transaction that occurred on Tuesday, July 28th. The shares were sold at an average price of $1.21, for a total transaction of $61,710.00. Following the sale, the chief executive officer now directly owns 26,390,449 shares of the company’s stock, valued at $31,932,443.29. The transaction was disclosed in a filing with the Securities & Exchange Commission, which is available through this hyperlink.

Tyme Technologies (NASDAQ:TYME) last issued its quarterly earnings results on Wednesday, May 20th. The company reported ($0.04) EPS for the quarter, beating the Thomson Reuters’ consensus estimate of ($0.07) by $0.03. As a group, sell-side analysts predict that Tyme Technologies Inc will post -0.28 EPS for the current year.

Tyme Technologies, Inc, a clinical-stage biotechnology company, develops novel cancer therapeutics. It is developing SM-88, a combination therapy based on dysfunctional metyrosine derivatives in Phase II development for metastatic pancreatic cancer and biomarker-recurrent prostate cancer. The company was founded in 2011 and is headquartered in New York, New York. 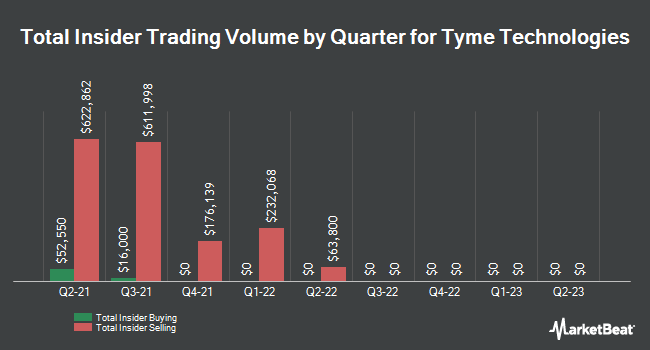 Ulord Price Down 10.8% Over Last Week