Skandinaviska Enskilda Banken AB publ lowered its holdings in THL Credit, Inc. (NASDAQ:TCRD) by 15.6% in the first quarter, according to its most recent Form 13F filing with the SEC. The fund owned 988,984 shares of the investment management company’s stock after selling 182,645 shares during the period. Skandinaviska Enskilda Banken AB publ owned about 2.80% of THL Credit worth $2,621,000 at the end of the most recent reporting period.

In other THL Credit news, CEO Christopher J. Flynn sold 30,600 shares of the firm’s stock in a transaction that occurred on Tuesday, April 21st. The shares were sold at an average price of $2.97, for a total value of $90,882.00. The sale was disclosed in a document filed with the SEC, which is accessible through this hyperlink. 0.43% of the stock is currently owned by corporate insiders.

THL Credit (NASDAQ:TCRD) last posted its earnings results on Thursday, May 7th. The investment management company reported $0.09 earnings per share (EPS) for the quarter, missing analysts’ consensus estimates of $0.16 by ($0.07). The company had revenue of $7.89 million during the quarter, compared to the consensus estimate of $9.72 million. THL Credit had a negative net margin of 197.03% and a positive return on equity of 10.28%. Research analysts anticipate that THL Credit, Inc. will post 0.39 EPS for the current fiscal year.

The company also recently announced a quarterly dividend, which will be paid on Tuesday, June 30th. Shareholders of record on Monday, June 15th will be paid a dividend of $0.10 per share. This represents a $0.40 dividend on an annualized basis and a yield of 12.38%. The ex-dividend date is Friday, June 12th. THL Credit’s payout ratio is 45.98%.

THL Credit, Inc is a business development company specializing in direct and fund of fund investments. The fund seeks to invest in debt and equity securities of middle market companies. It seeks to invest in PIPES, growth, acquisition, market or product expansion, recapitalization, mature, and change of control transactions in both sponsored and unsponsored issuers.

Want to see what other hedge funds are holding TCRD? Visit HoldingsChannel.com to get the latest 13F filings and insider trades for THL Credit, Inc. (NASDAQ:TCRD). 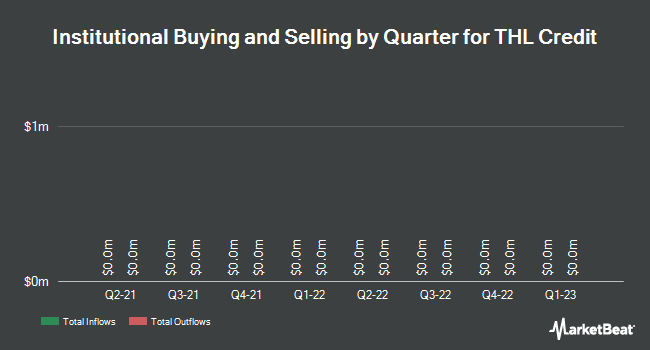