SiTime (NASDAQ:SITM) released its quarterly earnings data on Tuesday. The company reported $0.19 earnings per share (EPS) for the quarter, topping the consensus estimate of $0.12 by $0.07, MarketWatch Earnings reports. The business had revenue of $35.54 million for the quarter, compared to analysts’ expectations of $33.00 million. SiTime’s quarterly revenue was down 11.7% compared to the same quarter last year. During the same quarter in the prior year, the firm earned $0.42 earnings per share.

In other SiTime news, CEO Rajesh Vashist sold 3,000 shares of the firm’s stock in a transaction on Wednesday, February 17th. The stock was sold at an average price of $135.24, for a total value of $405,720.00. The transaction was disclosed in a legal filing with the SEC, which is available through this hyperlink. Also, insider Fariborz Assaderaghi sold 306 shares of the business’s stock in a transaction on Monday, February 22nd. The shares were sold at an average price of $114.09, for a total transaction of $34,911.54. Following the transaction, the insider now directly owns 123,798 shares of the company’s stock, valued at approximately $14,124,113.82. The disclosure for this sale can be found here. In the last ninety days, insiders have sold 14,988 shares of company stock valued at $1,647,683. Insiders own 0.80% of the company’s stock.

SiTime Corporation provides silicon timing systems in Taiwan, Hong Kong, the United States, and internationally. It provides resonators and clock integrated circuits, and various types of oscillators. The company's solutions are used in various markets, including enterprise and telecommunications infrastructure, automotive, industrial, Internet of Things, mobile, and aerospace and defense.

Read More: What is an Initial Coin Offering (ICO)? 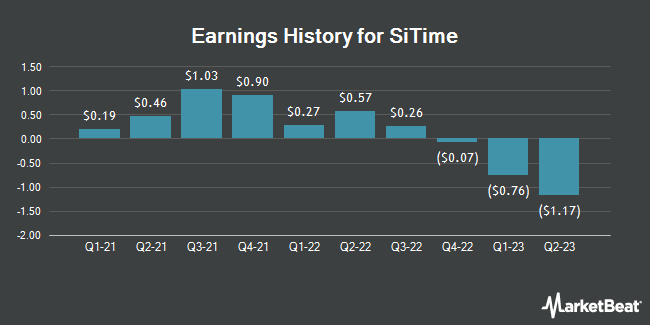 Receive News & Ratings for SiTime Daily - Enter your email address below to receive a concise daily summary of the latest news and analysts' ratings for SiTime and related companies with MarketBeat.com's FREE daily email newsletter.

OneSpaWorld Shares Up 5.8% After Better-Than-Expected Earnings

Complete the form below to receive the latest headlines and analysts' recommendations for SiTime with our free daily email newsletter: