Vident Investment Advisory LLC boosted its holdings in shares of Silicon Motion Technology Co. (NASDAQ:SIMO) by 65.9% in the second quarter, according to its most recent disclosure with the Securities and Exchange Commission (SEC). The firm owned 12,844 shares of the semiconductor producer’s stock after purchasing an additional 5,100 shares during the period. Vident Investment Advisory LLC’s holdings in Silicon Motion Technology were worth $823,000 as of its most recent filing with the Securities and Exchange Commission (SEC).

Silicon Motion Technology Corp. engages in the development, manufacture and supply of semiconductor products for the electronics market. The firm products include Flash Controllers, Storage Solutions, and others. It offers embedded and expandable storage, radio frequency integrated circuits and embedded graphics.

See Also: What is the accumulation/distribution indicator?

Want to see what other hedge funds are holding SIMO? Visit HoldingsChannel.com to get the latest 13F filings and insider trades for Silicon Motion Technology Co. (NASDAQ:SIMO). 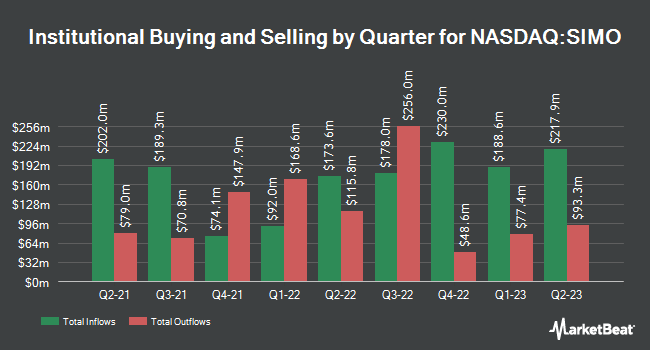 Complete the form below to receive the latest headlines and analysts' recommendations for Silicon Motion Technology with our free daily email newsletter: