According to Zacks, analysts expect that Silicon Motion Technology will report full year sales of $902.59 million for the current financial year, with estimates ranging from $899.98 million to $903.60 million. For the next financial year, analysts anticipate that the business will post sales of $1.01 billion, with estimates ranging from $869.62 million to $1.08 billion. Zacks’ sales calculations are an average based on a survey of sell-side analysts that that provide coverage for Silicon Motion Technology.

Silicon Motion Technology (NASDAQ:SIMO) last issued its quarterly earnings results on Thursday, July 29th. The semiconductor producer reported $1.42 earnings per share for the quarter, topping the Thomson Reuters’ consensus estimate of $1.31 by $0.11. The company had revenue of $221.10 million for the quarter, compared to analysts’ expectations of $203.95 million. Silicon Motion Technology had a return on equity of 18.30% and a net margin of 16.27%.

The company also recently announced a quarterly dividend, which was paid on Thursday, August 19th. Shareholders of record on Thursday, August 5th were issued a $0.35 dividend. This represents a $1.40 dividend on an annualized basis and a yield of 1.86%. The ex-dividend date was Wednesday, August 4th. Silicon Motion Technology’s dividend payout ratio is 60.96%.

Silicon Motion Technology Corp. engages in the development, manufacture and supply of semiconductor products for the electronics market. The firm products include Flash Controllers, Storage Solutions, and others. It offers embedded and expandable storage, radio frequency integrated circuits and embedded graphics. 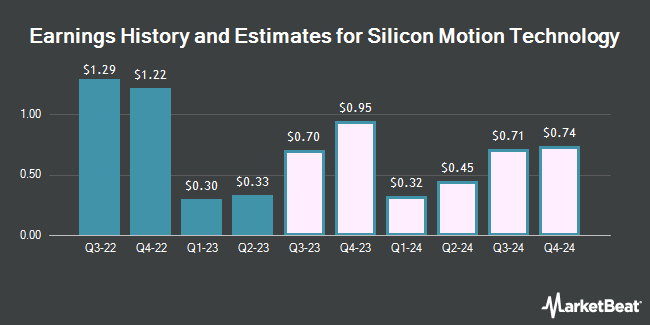 DSLA Protocol Price Up 16.2% This Week

Complete the form below to receive the latest headlines and analysts' recommendations for Silicon Motion Technology with our free daily email newsletter: