Shop While Tweeting Could Become Commonplace 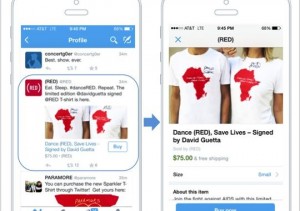 Twitter wants its users to stop while tweeting. Starting on Monday, the mini-message service will start testing buy buttons on its tweets.

A small percentage of users in the U.S. will see those buttons in the apps for Twitter on Android and iOS.

Twitter said its users that take part in this test will get merchandise and offers not available anywhere else. They will be able to complete the transaction in just a few taps.

Brands, artists as well as nonprofits like Burberry, Pharrell and DonorsChoose are amongst the accounts that have tweets that feature a buy button.

This is the first major initiative in e-commerce from the mini-messaging site since hiring Nathan Hubbard the former CEO of Ticketmaster as the head of commerce last year, just before the company went public.

Commerce could start a new source of revenue for Twitter, which as a company that is publicly traded faces constant pressure to increase sales.

Twitter has experimented with the use of e-commerce and teamed with the likes of online retailer Amazon.com to let its users add products by responding to a product tweet with an AmazonCart hashtag.

Facebook is currently testing a feature allowing its advertisers to sell their products directly through advertisements they buy on the network.

Pinteret users have also demonstrated they have interest in purchasing products they pin on that service.

For all the possibilities, the social networks have seen with regard to shopping, most efforts to attract people to purchase stuff whilst they are chatting have not succeeded.

Analysts are saying that Twitter will face the same hurdles in its attempt to sell products.

Twitter is also launching its bid for e-commerce amidst the drumbeat of the security breaches that have left a troubling impression with some consumers in the U.S. that tech companies have become too complacent about online security.

Twitter said shipping and payment information would be encrypted, but its stores information after the first transaction and the user must remove that information from its account if you do not want it to be stored by Twitter.