Sei Investments Co. lowered its stake in Bank of Montreal (NYSE:BMO) (TSE:BMO) by 1.4% during the 4th quarter, according to the company in its most recent filing with the Securities & Exchange Commission. The institutional investor owned 1,265,622 shares of the bank’s stock after selling 18,005 shares during the quarter. Sei Investments Co.’s holdings in Bank of Montreal were worth $98,085,000 as of its most recent SEC filing.

Bank of Montreal (NYSE:BMO) (TSE:BMO) last issued its quarterly earnings data on Tuesday, December 3rd. The bank reported $2.43 earnings per share for the quarter, topping the consensus estimate of $1.82 by $0.61. The business had revenue of $6.09 billion during the quarter, compared to the consensus estimate of $5.86 billion. Bank of Montreal had a net margin of 14.86% and a return on equity of 14.03%. The company’s revenue was up 3.3% compared to the same quarter last year. During the same quarter in the previous year, the firm earned $2.32 EPS. As a group, equities research analysts predict that Bank of Montreal will post 7.47 EPS for the current fiscal year.

The firm also recently declared a quarterly dividend, which will be paid on Wednesday, February 26th. Investors of record on Monday, February 3rd will be given a $0.7965 dividend. This is an increase from Bank of Montreal’s previous quarterly dividend of $0.78. The ex-dividend date is Friday, January 31st. This represents a $3.19 annualized dividend and a yield of 4.15%. Bank of Montreal’s dividend payout ratio is 45.07%.

Want to see what other hedge funds are holding BMO? Visit HoldingsChannel.com to get the latest 13F filings and insider trades for Bank of Montreal (NYSE:BMO) (TSE:BMO). 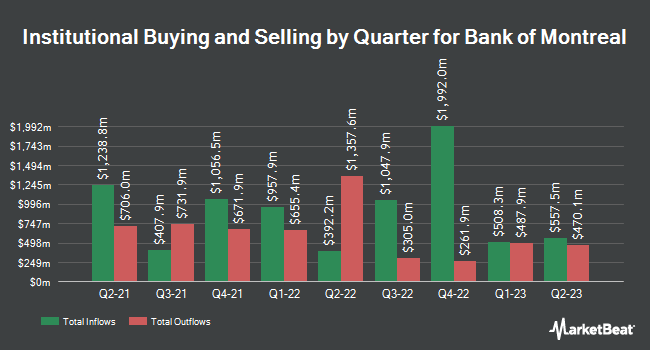