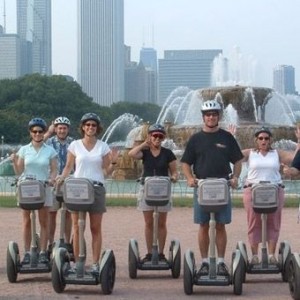 Segway has been acquired by a rival from China. Ninebot, based in Beijing established during 2012 announced on Wednesday that it purchased Segway having been accused previously of patent infringement by the U.S. based company.

The two-wheeled, electric, self-balancing Segway the personal transporter was launched in 2001. Dean Hamen developed the unit. Segway uses gyroscopic sensors that make it stay upright at speeds as high as 12.5 mph. It is not legal to ride them on any public pavements within the UK, but most U.S. states allow them.

Famous people that have taken falls on the Segways include former U.S. President George Bush and Piers Morgan the television personality, who broke his ribs when he fell off one.

Segwayers who have been more successful include Steve Wozniak the co-founder of Apple. He is on the Segway polo team called the Silicon Valley Aftershocks. Karsten Jacobsen the heroic cameraman who combined the use of the Segway and steadicam for a spectacular shot of the Eurovision song contest in 2009.

In 2009, Jimi Heselden a British entrepreneur purchased Segway on Christmas Day, but he was killed just nine months afterwards while riding one close to the cliffs in the UK. In 2013, the company was purchased by Summit Strategic Investments.

Ninebot in 2014 was amongst a number of distributors and manufacturers making and selling transporters that were accused by Segway of patent infringement.

The Segway acquisition is backed by $80 million from Xiaomi the Chinese based smartphone maker, which is the third largest manufacturer of smartphones in the world and by Sequoia Capital a California firm in venture capital.

Segway had been attempting to block the imports of other self-balancing transporters into the U.S. but with this deal, it appears that a resolution has been reached.

In a prepared statement that Ninebot issued, Rod Keller the Segway president said the strategic alliance that has been reached with Ninebot would enable Segway to provide more valuable and intelligent products for the consumer.