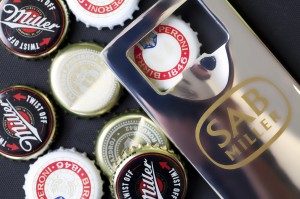 SABMiller the second largest brewer in the world reported growth in beer volume during the third quarter that did not meet estimates of analysts on declining sales in Europe and sales that were weaker than had been anticipated across Africa.

Beer volume was up 1% on the organic basis for the three month ended December 31, said the company in a prepared statement. That figure missed the estimate of analysts of 2%.

One analyst in London said beer volumes for SAB had been softer than expected across Europe, South Africa and Africa, though growth in revenue was solid in all regions except Europe.

SABMiller has a greater exposure in developing markets than its competitors. In those economies, the demand for beer has grown at a faster rate than in the U.S. and western Europe.

The profit for the first half for SAB beat analysts’ estimates on growth in regions such as Africa and Latin America, which offset declines across Europe. In November, the company said emerging markets would continue driving improvements, even while other companies selling consumer goods report slowdowns in their sales in regions from China to India. Stock was down early Tuesday in trading in London.

Alan Clark the CEO at SAB said growth for the company during the third quarter came from emerging markets. Clark said this was despite the fact there was weak consumer sentiment, which particularly hurt the North American and European sectors of the business.

In Africa, beer volume increased by 6%, which was less than the anticipated 9% and lager sales in South Africa, dropped 2% amidst a weaker consumer and economic environment. SAB said that Mozambique’s political unrest and softer economic conditions for Zimbabwe and Uganda offset the improvement made in Nigeria, Tanzania and Zambia.

Lager volumes across Europe plummeted by 5%, which was 4% more than the anticipated 1% fall. Weaker than expected consumer confidence and more competition in Italy, Poland and Romania offset the improvement made in the UK.

Sales to U.S. retailers at SAB’s unit MillerCoors dropped by 1.9%, which was what had been estimated, led by a drop in Miller Lite and Coors Lite purchases.

Volume of beer in Latin America was up 2%, which is the company’s largest region that represents close to one third of last year’s sales.