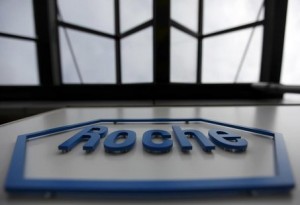 Roche Holding AG the Swiss drug maker announced flat sales for the first 9 months of this year, but said on Thursday its results showed strong demand for its drugs for cancer and its new emerging products.

However, when that is measured in exchange rates that are constant, sales were up 5% over the first 9 months of this year.

It noted that many currencies, of note the U.S. dollar, have remained weaker than the Swiss franc throughout the entire year.

The biggest producer in the world of drugs that fight cancer said its cancer medicine sales including Perjeta, Kadcyla and Herceptin together were up 21%, while sales of its treatment for rheumatoid arthritis Actemra, RoActemra was up 24%.

For the first nine months, using a measure with constant rates of exchange, Roche said sales were higher by 4% in the pharmaceutical division while 6% higher for its diagnostics division.

During the third quarter, sales at Roche were up 1.8% from the same period last year. Sales for the company were 11.78 billion francs between July and the end of September, which was up from last year during the same period of 11.57 billion.

Severin Schwan the CEO at Roche said that demand for the company’s products remained strong for both divisions and the company is online to reach its targets for the full year.

Earlier in October, Roche gained the approval of the U.S. Food and Drug Administration for its drug Esbriet. Roche says that the drug could make a big difference in treating patients that have idiopathic pulmonary fibrosis a debilitating disease of the lungs.

A strong showing from Kadcyla and Perjeta the company’s two new therapies for breast cancer helped to offset the company’s loss of the exclusivity of Xelada a chemotherapy drug and the falling sales for Pegasys a hepatitis medicine, which has faced growing competition.

MEI Pharma, Inc. Expected to Announce Earnings of -$0.15 Per Share