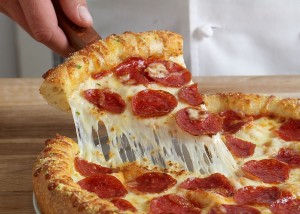 Domino’s Pizza Inc posted revenue for the quarter that missed estimates by analysts for just the first time in the past two years due to the strong dollar and added that CFO Michael Lawton would retire on August 31.

Shares of the pizza company were down by 3% in midday trading Thursday on the NYSE. Revenue in the second quarter that ended on June 14 was up 8.4% to reach $488.6 million, which is the slowest growth in the past six quarters, missing analyst estimates of $489.1 million.

However, the company announced it had a better than had been expected increase in sales at same stores for the quarter helped by better online and mobile systems for ordering.

The company has outperformed its rivals of late including McDonald and Pizza Hut. One reason for the improvement has been the investment in digital tech, which helps to make it easier for the customer to order pizza, using methods of digital wallets and smartwatches.

The company received about 7.4% of its overall revenue from outside the U.S. during this most recent quarter ended.

The second largest pizza chain in the U.S. by number of stores said its CFO who has been in that position since August of 2010 would be replaced by Jeffrey Lawrence the current Treasurer.

Analysts were expecting profit to be 79 cents a share. Up to the close of business on Wednesday, the company said shares were up 26% for 2015.