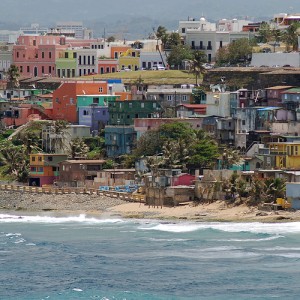 In a recession for 9 years, the Caribbean island is battling as items in supermarkets that are 21% higher than the average in the U.S. even as more than 41% of the population lives amidst poverty.

Puerto Rico is going through a severe fiscal crisis as it is in debt by more than $72 billion, which the governor declared recently was not payable.

The island has been suffering from a recession since the beginning of 2006, with unemployment reaching nearly 13%. That is compared to a rate in the U.S. of 5.5% and a poverty rate of higher than 41% compared to 14.3% in the U.S.

While the Caribbean jewel is dotted with chain stores from the U.S. such as Walgreens and Walmart, amounting to the largest concentration in the world of those stores, residents face costs that are much higher for necessities, while earning a very low income per capita of only $19,000 annually, which is half the average in the U.S.

A recent Institute of Statistics report compared the Puerto Rico cost of living with that of over 325 urban areas within the U.S.

The report found that items in supermarkets were as much as 21% higher than in the U.S. The island’s utilities were the fourth highest priced with only Hilo, Hawaii, Honolulu, Hawaii and Fairbanks, Alaska higher.

Overall, the Puerto Rico cost of living ended up 13% higher than the 325 areas selected in the U.S.

Gasoline in Puerto Rico, which has little public transportation, especially outside of San Juan, is $3.22 per game compared to a current national average in the U.S. of $2.67.

The average monthly energy cost in Puerto Rico which includes natural gas and electricity, among other sources, is $438 compares to just $169.50 in the U.S. Most of that difference is due to the high cost of electricity.

In Puerto Rico, even the cost of buying a home is above the U.S. national average.