Problems at Port Threaten Retailers in U.S. for Holidays 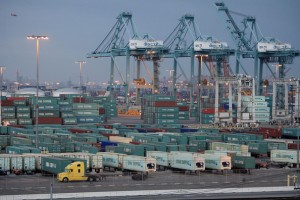 A lack of transportation equipment and the possibility of labor disruptions at the Long Beach/Los Angeles port complex, the busiest in the nation, is delaying for as long as three weeks shipping containers, threatening the timely delivery of products to retailers for the upcoming holiday season.

These delays are affecting huge retailers such as JC Penney, Macy’s, Kohl’s, Nordstrom, American Eagle, Ralph Lauren and Carter’s said people who have direct knowledge about this situation.

Wal-Mart the retail behemoth recently diverted more than 300 shipping containers up north to Oakland so as not to have the same congestion.

The problem comes from the shortage of chassis, a trucking equipment, but the NRF or National Retail Federation said in a prepared statement that protracted labor discussion were to blame as well.

The International Longshore and Warehouse Union has declined to make any comments as to whether the talks had an effect on the deal.

The majority of retailers acknowledged that the delays in key ports were from shipments arriving from the Far East, but said they were not anticipating any shortages in product during the approaching holidays.

Even so, any form of delay could derail the just in time inventory that is finely calibrated and could make retailers spend more money to put the product on their shelves.

With the contracts at major ports up this year for renewal, retailers such as Wal-Mart made orders early and prompted a spike in deliveries for June and July, showed port statistics.

However, a significant volume also arrived during the normal period of August-October that precedes the holiday shopping season of November – January.

It typically takes between two or three days to move a cargo ship out of port.

One freight forwarder said that Nordstrom, Kohl’s, Macy’s and JC Penney had products in containers arrive more than two weeks ago and still have not received the merchandise.

An importer of apparel, Ralph Lauren, Carter’s and American Eagle have also been delayed in port.

Macy’s and JC Penney both said they did not anticipate issues related to significant delay.