PPG Industries, Inc. (NYSE:PPG) declared a quarterly dividend on Wednesday, January 15th, RTT News reports. Investors of record on Tuesday, January 21st will be given a dividend of 0.51 per share by the specialty chemicals company on Thursday, March 12th. This represents a $2.04 annualized dividend and a yield of 1.61%.

PPG Industries (NYSE:PPG) last announced its earnings results on Thursday, January 16th. The specialty chemicals company reported $1.31 earnings per share for the quarter, missing the Zacks’ consensus estimate of $1.34 by ($0.03). The company had revenue of $3.67 billion during the quarter, compared to the consensus estimate of $3.67 billion. PPG Industries had a return on equity of 28.36% and a net margin of 8.00%. The company’s revenue was up .7% on a year-over-year basis. During the same period in the prior year, the firm posted $1.15 earnings per share. Equities analysts anticipate that PPG Industries will post 6.25 earnings per share for the current year.

Featured Article: How is the discount rate different from the Federal Funds rate? 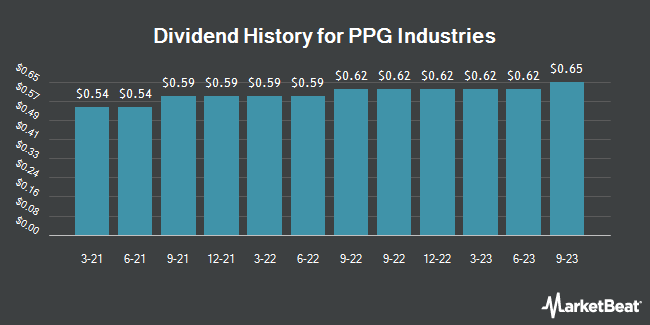 OWNDATA Price Down 11.5% This Week