Equities research analysts expect Pluralsight Inc (NASDAQ:PS) to report sales of $95.32 million for the current fiscal quarter, according to Zacks Investment Research. Eight analysts have made estimates for Pluralsight’s earnings. The highest sales estimate is $95.84 million and the lowest is $93.71 million. Pluralsight posted sales of $82.62 million in the same quarter last year, which suggests a positive year over year growth rate of 15.4%. The firm is expected to issue its next earnings report on Wednesday, November 4th.

According to Zacks, analysts expect that Pluralsight will report full-year sales of $382.81 million for the current year, with estimates ranging from $382.18 million to $383.61 million. For the next financial year, analysts expect that the business will report sales of $447.31 million, with estimates ranging from $438.86 million to $461.26 million. Zacks Investment Research’s sales calculations are an average based on a survey of sell-side research analysts that cover Pluralsight.

Pluralsight (NASDAQ:PS) last posted its quarterly earnings data on Wednesday, July 29th. The company reported ($0.27) earnings per share for the quarter, topping analysts’ consensus estimates of ($0.30) by $0.03. The business had revenue of $94.77 million for the quarter, compared to analyst estimates of $88.23 million. Pluralsight had a negative return on equity of 57.32% and a negative net margin of 36.22%. The company’s revenue was up 24.9% on a year-over-year basis. During the same quarter in the prior year, the company earned ($0.06) earnings per share.

Pluralsight, Inc provides a technology skill development solutions worldwide. Its cloud-based technology skills platform offers a range of tools, including skill and role assessment tool, which uses machine learning and advanced algorithms to measure a user's skills, benchmark that user against others in the industry, and recommend opportunities for growth; and Course Library that include a digital ecosystem of thousands of on-demand courses across a range of technology subject areas, such as cloud, mobile, security, IT, and data. 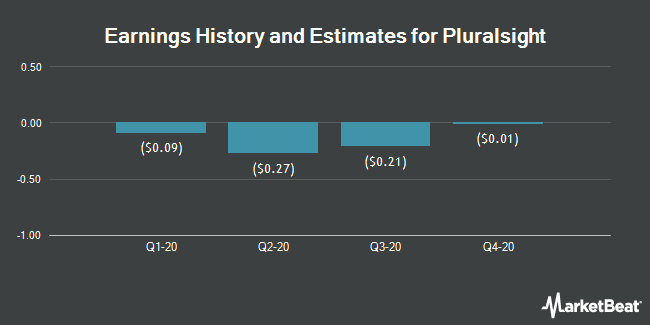